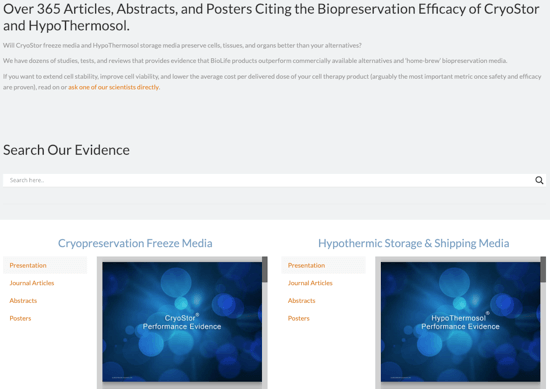 One of the benefits of cryopreserving cells is the flexibility in scheduling for later use that freezing provides. Determining the optimal solution for cryopreservation that consistently results in post-thaw recovery of the greatest number of highly viable, functional cells is crucial. The article by Sara S. Parker et al. published in eNeuro and recently added to BioLife’s Evidence library explains the process her group used for cryopreservation reagent selection and cell evaluation; applied to primary mouse embryonic cortical neurons for research.

The next article by Richard Harrison et al. published in Stem Cell Research & Therapy and recently added to BioLife’s Evidence library applies to storage and transport of cells intended for therapeutic use that have been labeled with magnetic particles.

A key component in cell therapy manufacturing is the cells’ ability to be stored and transported. Magnetically labeled MSCs, ReNs and CMCs were stored 24 hours at 4°C in HypoThermosol®FRS.

Regarding holding of MSCs at 4°C, the authors note, “To enhance cell stability, the final product can be stored at 4°C in a specialized hypothermic storage media such as HypoThermosol prior to injection…”

Which stage along the pathway to cell therapy commercialization are your cells at today? Biopreservation solutions play key roles at every stage. Plan ahead! Ask the Scientists. Consult our staff of cryopreservation experts for help optimizing your cell preservation processes. Call 1.866.6543 (toll-free in North America) or direct: 1.425.402.1400, today!